Written by swisschamber on October 25, 2017 in Blockchain, Events

On October 17, the Swiss Canadian Chamber of Commerce invited for a Swiss Crypto Valley Cocktail Reception. Over 90 attendees discovered that Switzerland is rapidly becoming one of the global leaders in Blockchain technologies and Crypto Currencies. The event was sold out. Here is a quick summary of the event.

After an introduction by Peter Schaub, Vice President of the Swiss Canadian Chamber of Commerce, the three speakers gave the audience fresh insights about the challenges of introducing blockchain technologies. The two Swiss speakers were further explaining how Switzerland is quickly becoming a European center for blockchain related companies. 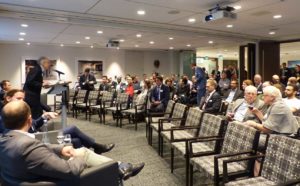 Lukas has been traveling all over North America introducing the Swiss Crypto Valley, presenting the many advantages that Switzerland has to offer to Blockchain companies, such as the decentralized political system, the high level of education and its legal framework. Bitcoin and Ethereum are just two companies that discovered Switzerland as great place to do business.

That’s where Thomas Linder, the second speaker, stepped in. He is a Tax Partner at MME, one of the largest legal companies in Switzerland and the firm assisting Ethereum to establish itself in Switzerland. He was highlighting one of Switzerland’s biggest advantages: its treatment of bitcoins as a currency. This gave Switzerland a major head start in the blockchain development industry and crypto currencies. From a legal perspective Switzerland has an open regulatory system. In short, it is relatively easy to speak directly with government regulators.

“Do you know that they world’s first Bitcoin ATM is in Vancouver?”

The third speaker Guy Halford-Thompson provided the story perspective of the evening – he talked about his experience of creating a successful company in the blockchain space.

He began to work with blockchain technology back in 2011. At that time, you could only buy bitcoins if you knew someone you already has bitcoins and who would exchange them. Halford-Thompson started to buy bitcoins in Canada, sent them to his brother in the UK, who sold them there and sent the money back. They did this for a couple of months until they realized that they could make a business out of this. Quickbitcoin was their first business they set up, their own portal to sell bitcoins. Guy and his brother sold Quickbitcoin in 2015 and at the same time they founded BTL.

The goal was to take the learning from Quickbitcoin and the technology behind it and apply it to traditional industries and infrastructure. They took their technology and worked with banks, helping them to improve their systems and technology. Today, BTL is expanding well beyond the financial sector.

Insight from the Q&A session

In response to the security of Blockchains, Guy Halford-Thompson explained:

“You can build the best safe in the world, but if you leave the door open, someone is going to break in and steal it. Blockchain is not introducing anything new, cryptography wise. Blockchain and bitcoin are built on cryptography that have been around for a while, just applied in a different way.

Generally, when you look at security issues we have in transactions on a day to day base, most of them are down to human errors. The amount of human errors is higher if you have complex systems. So from my view, the majority of the additional security we get from implementing Blockchain technologies is because the systems itself are drastically less complex. It’s not going to eliminate hacking or other security issue but it’s a much simpler system.”

This event was made possible by the generous support of the Royal Bank of Canada, the Swiss Consulate General in Vancouver, and the Greater Zurich Area Organization, a Public Private Partnership in Switzerland. And finally, this event was the result of the tireless efforts of Nina Bader, our executive secretary, and the board of directors of the Swiss Canadian Chamber of Commerce.

In case you were wondering: The very first bitcoin ATM is at Waves Coffee Shop on Howe and Smithe in Downtown Vancouver.

Previous Blockchain Post: Switzerland and Blockchain – A Marriage Made in Heaven?