Written by swisschamber on August 22, 2019 in Portraits, Sport

Many of you have probably heard of Joey Kenward. You may know him through the sports channels as the Vancouver Canucks broadcast and radio host. We had the pleasure to welcome Joey on a few events such as the Pre-Christmas Reception 2018 where he moderated our Q&A with the Swiss NHL players. We always appreciate his presence at our events. Learn more about his interesting career and life as a broadcaster in the following interview: 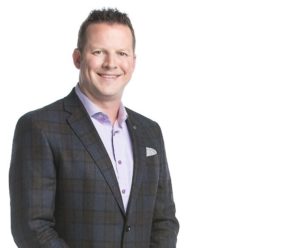 Joey, where you are from and what lead you to become a broadcast host and reporter for the Vancouver Canucks?

I was born and raised on Vancouver Island and have been a lifelong fan ever since I can remember. I grew up listening to Hall of Fame broadcaster Jim Robson call Canucks games on radio and television. After graduating from the BCIT broadcasting program in 1998, I have been involved in the sports broadcasting scene on a provincial and national level ever since. I joined the Canucks broadcast family in 2008 and have held a number of roles, including play-by-play broadcaster, rink-side host and pre-and-post game show host.

When and how did you realize that broadcasting and reporting is your passion and skill?

I am very lucky to be doing what I wanted to do since I was a young kid. In school, I did everything from reading the morning announcements, to hosting assemblies, to MC’ing sporting events. As I grew older, I gained plenty of experience in small and medium sized markets to help better prepare me for the opportunities I have had in Vancouver for over the last 15 years.

Has it always been a dream to work in the Sports industry, especially for the Canucks?

I can honestly say I have seen a childhood dream come true. Growing up a sports fan, and especially a Canucks fan, my goal from a young age was to be one of their broadcasters. In addition to being a part of the Canucks broadcasts on radio and television, I have also been fortunate to be a broadcaster for the Vancouver Whitecaps in Major League Soccer as well as a talk show host on different radio stations in the city.

Have you always been an ice hockey fan and player?

While I have always been a fan of the game, I did not play much ice hockey growing up. I played two years when I was in elementary school, but played plenty of road hockey with friends in my neighborhood. I was a better soccer player as a kid which evolved into me becoming a high-level soccer referee as I grew older.

What do you like the most about your job?

The thing I enjoy most about my job is that no two days are the same. Being able to entertain and educate sports fans has been something I have always enjoyed. I feel very fortunate to have develop some great relationships and terrific friendships through being a sports broadcaster. I feel strongly that can benefit a new additional role I have taken on as an account manager at Sportsnet 650, the radio station that broadcasts Canucks game.

Can you explain us how a regular workday looks like?

While no two days are the same, there are many elements that are similar. I usually wake up around 6:00am and am at the radio station anywhere between 8:00-9:00am. Throughout the day I have meetings with clients and business partners to help build their business. During hockey season, I am at the arena for every game in the evenings. By the time my day is done, I’m usually home and asleep by midnight. Some people may see that as a long day, but I do not.

You are not only working for the Canucks, tell us what you do beside being a broadcaster?

As I mentioned earlier, in addition to being a sports broadcaster, I now handle on-air and digital sales/advertising accounts for all of the Rogers Media partners in Vancouver. This includes Sportsnet 650 as well as three other stations in Vancouver (News 1130, Jack FM and KiSS FM). These are fantastic and affordable ways for local businesses to build their brand and increase profits. Our different platforms reach people of all ages. I would be happy to speak with anybody affiliated with the Swiss Canadian Chamber who might be interested in any opportunities Rogers provides. The best way to contact me is joey.kenward@rci.rogers.ca

What are your goals or plans?

My goals are to continue to be an entertaining and informative broadcaster, while at the same time help build successful relationships through advertising campaigns that can grow business for my clients.

Living in such a beautiful city like Vancouver, I love spending time outdoors. I enjoying playing golf, even if I’m not that good! I also enjoy running and staying fit. Over the last few years, I have become a big fan of horse racing, so I enjoy spending time at the track when the racing season is on during the summer.

Have you ever been to Switzerland?

I have never been to Switzerland, but it is definitely on my list of places to visit one day. I have been fortunate to travel around different areas of Europe, but have not yet been there. I have met some great people from Switzerland, including those who play in the National Hockey League.

What are your thoughts about the Swiss ice hockey?

I think Switzerland has become one of the fastest growing European hockey nations in the last decade. Every year, more and more young players come to North America to improve their chances at playing professionally. Through a combination of great coaching and player development, Switzerland has improved on the international stage at both the youth and adult levels. There have been nearly 40 Swiss-born players make it to the NHL and I have no doubt that number will grow in the future.

Thank you Joey, for taking the time. We wish you all the best for your future and hope to welcome you at our upcoming events.